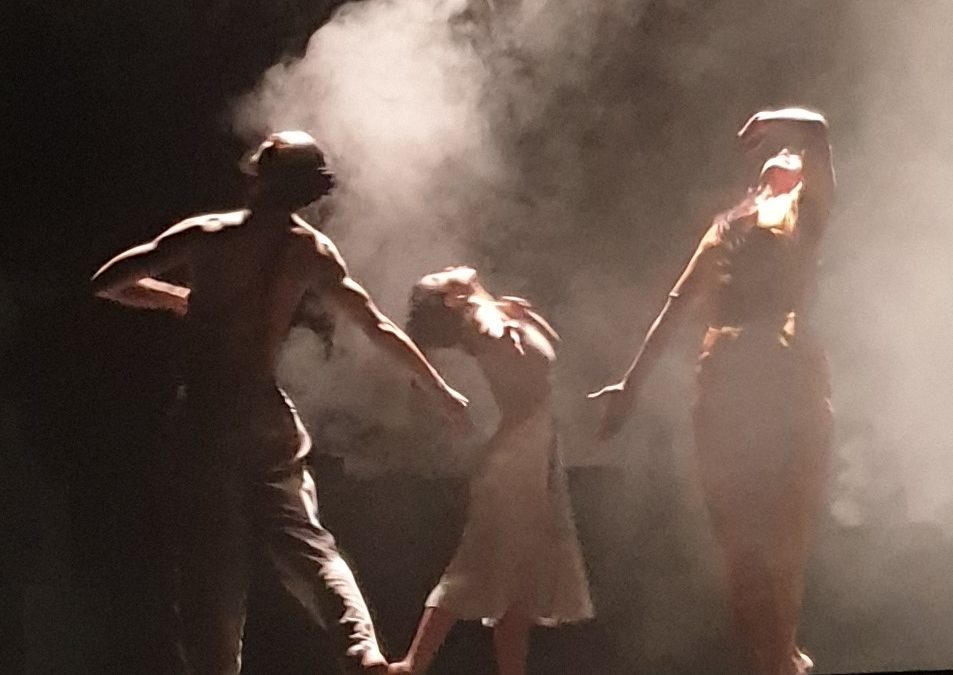 That I quickened my steps. Missing the train meant having to wait for another twenty minutes.

At the same time, I was still o a high from Outwitting the Devil. A fragment of the 4000-year-old Gilagmesh epic performed by Akram Khan (British Bengali Choreographer). The best I’ve seen in years. I was moved to tears by the beauty of the dancers, the story and the penetrating apocalyptic music.

If you are a storyteller and have a son who studies film music then you experience this performance from a different perspective. Dancers from 26 to 68 years old told a story about lost knowledge and fallen gods on a stage that was decorated with black clay tablets as a cemetery.

What is he doing now? Less than two meters behind me are colourful, arty young people laughing at the scene unfolding before their eyes. A meter in front of me is their friend. Zigzagging from right to left, blocking my route and obstructing my passage. I want to pass him, but I cannot discover his pattern. Is that the pattern?

He turns his head. Surprised and with an infectious smile. He clearly had not seen me and thought his friends were laughing at him. He is caught up in himself and them. Totally ignorant of my failed avoidance strategy and the laugh it was causing.

He: “Walking between the lines.”

I look down. The lines of the tiles! Large, rectangular, square and narrow tiles that adorn the floor of Hoog Catherijne. In milliseconds, a scene with Jack Nicholson in As Good As It Gets flashes through my mind. Avoiding the cracks.

And then we dance. In the empty space. Avoiding the lines. Just like the clay tablets. In front of each other, next to each other, behind each other. A whirlwind of movements emphasised by our long coats. Borders  fade, people fade. For a moment we are children who have discovered a secret playground. A 52 year old woman of and a 20 year old boy. Children sharing the same rhythm.

You did it! High five!

Which I can assure you was pretty difficult. But oh so nice! Within no time we, two strangers, were connected. That could have gone sideways.  I could have thought:
Hey! stay in your lane! How rude! So selfish! Don’t you see I’m in a hurry! This is not a playground! You are obstructing my path! Because of you I will miss my train! Because of you I will be home later! Becuase of you…

The cracks separating us. If we are not careful, we can stumble and even fall into them. Fall into our prejudices, fears, beliefs, beliefs, assumptions, monsters, dragons, snakes … Or we can play as children in the space between the lines. the vaccuum we fill in dancing together. Connected. We’re at the doors. We look at each other, say goodbye with a touch and know that we will never forget this moment. Connected. Because of you, my evening has a fitting final scene. Because of you I want to hold on to this memory. Here and now.